You can tell the semester has started…

Popcorn, Successful Eggplant, and Other Adventures

Several weeks ago, we got popcorn in our CSA share. We never managed to use our popcorn in past years, but we were excited to give it a try this year. I grew up popping our own popcorn, but I’ve never done it myself. We used this recipe as a guideline; the popcorn was delicious.

We’ve been continuing our quest to consume leafy greens; this week’s first adventure was making the White Bean and Swiss Chard Pot Pies from Smitten Kitchen. I’m usually pretty skeptical of baking greens–I have a strong dislike of the stringy texture that sometimes results. But, we tend to trust Smitten Kitchen (and pie crust solves most problems), so we went ahead with the pot pies.

We went to a vegan potluck at FUS yesterday. We wanted to take something different this time, but we didn’t want to adventure too far. We went with the Herb-Scalloped Potatoes from Veganomicon. We included the nutritional yeast topping; we’re sometimes skeptical about nutritional yeast, but I was reluctant to leave out ingredients during the first go-around. The yeast was actually a nice addition–it wasn’t trying to emulate cheese too much, but added a good flavor and texture.

This post is getting pretty long, but we’ve made two other fun dishes recently. First, we made these Flourless Chocolate Chip Zucchini Oat Brownies from Ambitious Kitchen. Now, I’ll admit that trying to make healthy desserts is often a lost cause; if you want a gooey brownie, you really just need to accept the calories and lack of nutrition that comes with it. But, it sounded like a good idea at the time. These are…okay. Aaron thinks it was the “flourless” part that really did us in. We’ll definitely still eat the pan (maybe with some powdered sugar on top!), but probably not a recipe we’ll make again.

And finally, the promised successful eggplant recipe. We thought about making eggplant enchiladas again, but decided to try something new. We went with Eggplant and Artichoke alla Napolentana from Vegan with a Vengeance. The recipe suggested that the artichoke can be replaced with zucchini; I really like artichoke, but we had tons of zucchini in the fridge, so we went with zucchini. These were basically fried eggplant with a delightful sauce and a pesto sauce (with basil picked from our patio!); they were delicious. Definitely a keeper of a recipe. Plus, I discovered that I actually do like pesto; I’m not sure what I was afraid of in the past, but this was much more successful than I had anticipated. We even enjoyed this dinner on our patio! We haven’t been eating out there as much this summer, but it’s a nice change when we do. We were actually rearranging our apartment last night, and our dining room table was otherwise occupied. 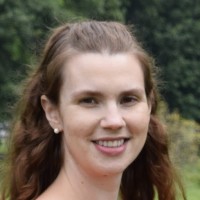